Last night the girls Varsity soccer team tied Oxford 4-4 in the final league game that would decide who would be the league champion. Gabby Green would start the scoring off will a goal from a corner kick. Maya Madi would add the second goal off of an assist from Lyndsey Bruce. The third goal came in the first half with Lara Mathias scoring from a pass from Chloe Barnthouse. The last and final goal for the Lakers would come late in the game as Gabby Green scored again unassisted with a few minutes left.

Going into the game the Lakers were 6-1-0 and needed a tie or a win at Oxford to clinch first place. The girls set a goal at the beginning of the year to be the league champion and at the end of the league games they would be the ones at the top. The Lakers have fought through league play all year, overcoming multiple injuries and often times playing games without a full roster. Through it all, the girls were motivated to achieve the goal they set for themselves at the even before the season started. This team wanted to leave their mark on the school and make sure that they did not leave the banner hanging up in the gym empty. The team wanted to make sure that after the Oxford game, the league championship banner in the gym would include 2019! Congratulations to the 2019 OAA White Champion – West Bloomfield Lakers Varsity Girls Soccer Team! 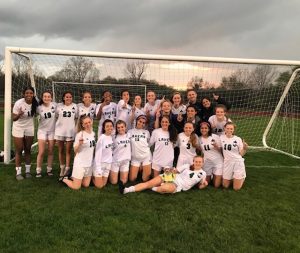