On Friday, October 4th, Pat Watson became the 8th member of the WBHS Coaches Hall of Fame.  He was honored before the Homecoming game.  Please read the script below to view all of Coach Watson’s accomplishments on the field throughout the years!  Congratulations Coach Watson!!!

Tonight we have a special presentation for you.  Please join us as we induct one of our own into our illustrious West Bloomfield Coaches Hall of Fame.

Pat Watson grew up loving sports with a special passion for football, baseball and basketball.  Sports have always played a major role throughout his life, whether he was watching, playing, umpiring, or coaching he has consistently surrounded himself with athletics.  Such as playing 3 high school sports, umpiring youth baseball games as a young man, playing on countless rec teams, coaching his 3 children in a variety of sports and running a multitude of sports camps, clinics and leagues.

During his time as the varsity baseball coach Pat posted a 239-153 career coaching record.  Some highlights of his baseball coaching career include, most wins in school history, 8 time coach of the year, named Head Coach of the 2009 Michigan High School Baseball Coaches Association East All Star Team, 2001 State Baseball Semi-Finalist, 2007 State quarter finalist-making him the only coach in WB history to lead two teams past the regional playoff round, 38 players that went on to play at the collegiate level, and never had a losing team during his baseball coaching career.  As a basketball coach, Pat accumulated over 400 career victories while preparing over 100 student athletes to move on successfully to the varsity level.

Coach Watson is married to his wife, Tammy, and has three children, Ryan, Rachel, and Renee.  One of his many hopes for the future is to never stop playing sports. He recently added golf and pickle ball to his long list of athletic interests, and hopes to be on a senior softball team one day while living somewhere warm where he can go to pre-season major league baseball games.

We cannot express the level of gratitude we have for all of Coach Watson’s contributions to the history of West Bloomfield Athletics.  He has truly made a positive impact in the lives of the thousands of students he has interacted with throughout his tenure in education.  Ladies and Gentlemen, please join me in welcoming the 8th member of West Bloomfield High School’s Coaching Wall of Fame…Pat Watson. 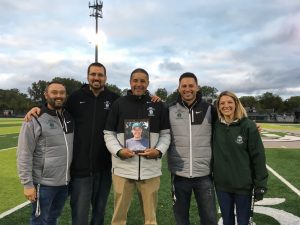