John Paul Ayar, a senior at West Bloomfield High School, is signing to play D3 hockey at Oakland University. Here he plans to study pre-med in hopes to one day pursue a career as a sports medicine doctor.

John Paul began skating when he was 4 and has been playing hockey since he was 5. He started his career off with the Orchard Lake Pirates and continued to skate out of the rink at Orchard Lake St Marys until his freshman year.

John Paul has been playing on the varsity hockey team since he was a freshman. He was named captain for both his Junior and Senior year. Throughout his four years, he has been a big contributor to the team both on and off the ice. His hard work in the classroom has helped his team earn Academic All-State for 4 years in a row. He continued to make his presence known on the ice through his persistence and passion. He has been one of the point leaders for the past 3 years and helped his team make it to the regional finals his sophomore year.

“I am extremely blessed and thankful for the opportunity to continue my academic and hockey career and Oakland University. I’d like to thank God for guiding and protecting me throughout my journey. A special thank you to my parents and my siblings. Thank you for being my #1 fans and biggest supporters at every single game. Thank you for all of the sacrifices that you guys have made along the way and shaping me into the person I am today. Finally, I’d like to thank my coaches and teammates along the years for always believing in me and pushing me to do my very best. I am excited for the next chapter of my life and looking forward to what the future holds.” 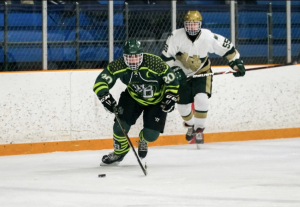