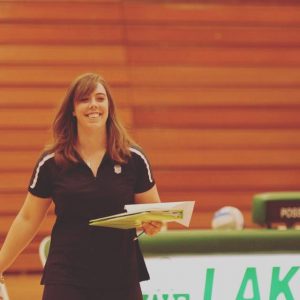 Lauren is entering her fifth year as a volleyball coach and her second year as the West Bloomfield High School Varsity volleyball coach. She has previously coached at WOVA and Michigan Elite Volleyball Academy. Lauren is now at Legacy Volleyball Club and is continuing to coach the National Lite level in the high school off season. On top of five years of coaching experience, she has 10 years of playing experience.  Lauren is a West Bloomfield High School Alumni (’09) where she played volleyball for all four years. She then moved onto collegiate play and was a starting outside hitter on Albion College’s volleyball team. She was Captain of the Albion College team and played all four years while attending school.  Lauren received her degree in May, 2013 in both Psychology and Political Science, with a concentration in Public Policy.  Currently, she also works in Project Management at a marketing agency called PrizeLogic, based in Southfield.

Coach Walker is entering her fourth year coaching volleyball and second at West Bloomfield High School. She has previously coached one JV and one Varsity season in Kingman, AZ where she also taught physical education for two years. She also has experience playing high school and AAU volleyball. This will be her fifth year teaching and second year teaching physical education at Abbott Middle School. She is married and has a two year old boy.